It is always the same with mountains.

Once you have lived with them for any length of time

you belong to them. There is no escape…’

My magnetism for mountains was instilled and deeply entrenched at the age of 21, when, with my small canon SLR carefully stowed, I headed for Nepal. What was a proposed 3 week dalliance with this far off destination, that I had only read about in books, turned in to a 3 month love affair with this mystical land, exploring the peaks, hills and valleys of the Himalayas.

It was here that my love for photography was born, but much more than that, a deep and sacred reverence for the spirituality that these ‘mythical beings’ (the mountains) exuded, totally enraptured me. Ever since then, the beckoning of far off hills is never far away…There is no escape. I belong to the mountains and the energy of high places. It is in the presence of their majesty that I feel most at home.

Please join us on Thursday from 6pm onward,
6th February at 110 Long street, for a collaborative evening of
Fine art photography by

THE WORLD IS BLUE

Photographs do not require words, they reveal moments of truth waiting to be discovered. With the advent of digital processing photography the loss of authenticity, personality and with it the ability to move and touch us, is evident. In creating these pictures I am purposely returning to an old technique to shift peoples perspective back to the essence of photography. 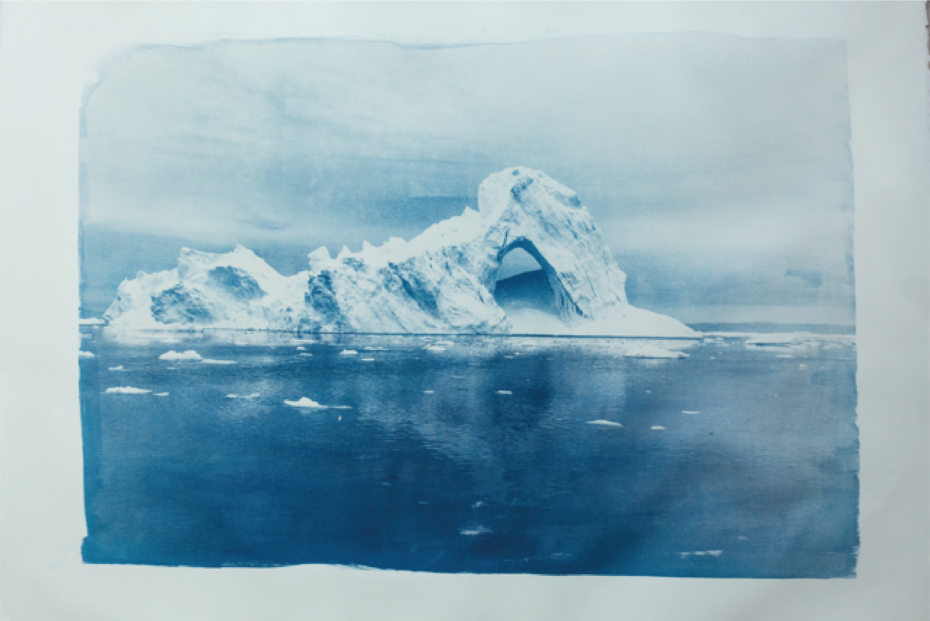 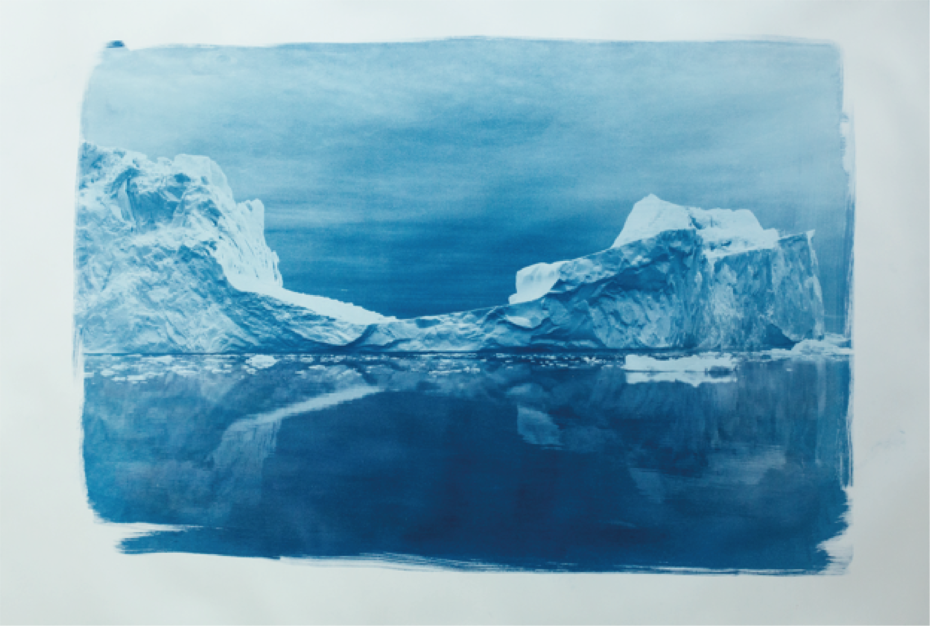 The use of this old process infuses my prints with more aliveness than any ink jet printer can. To develop these pictures I make use of an old printing technique from 1840. Each photograph is handmade, unique and original. None will look the same. It is a symbiosis of photography and the painting with light and iron. True originals. The technique, the individuality of each image and the limited edition are making the pictures so valuable.

We crossed paths on a frozen stream. He was easily over ninety years old, though the dry winds here will give wrinkles to a child, and make guessing age difficult. I was trailing the hill pigeons and inadvertently followed him to the small adobe building that was his home. We spoke freely without understanding each others words, his voice was beautiful and I was perplexed that anyone was living alone so high up in the valley. Both the long key he pulled from his robe and the wooden door it unlocked seemed from another time. I stayed a moment to help him prepare his evening’s firewood, he moved slowly but showed remarkable skill splitting kindling with his hand axe. I wonder what it feels like to be there some nights, around that crackling fire when the Himalayas breathe heavy and the wolves howl outside. 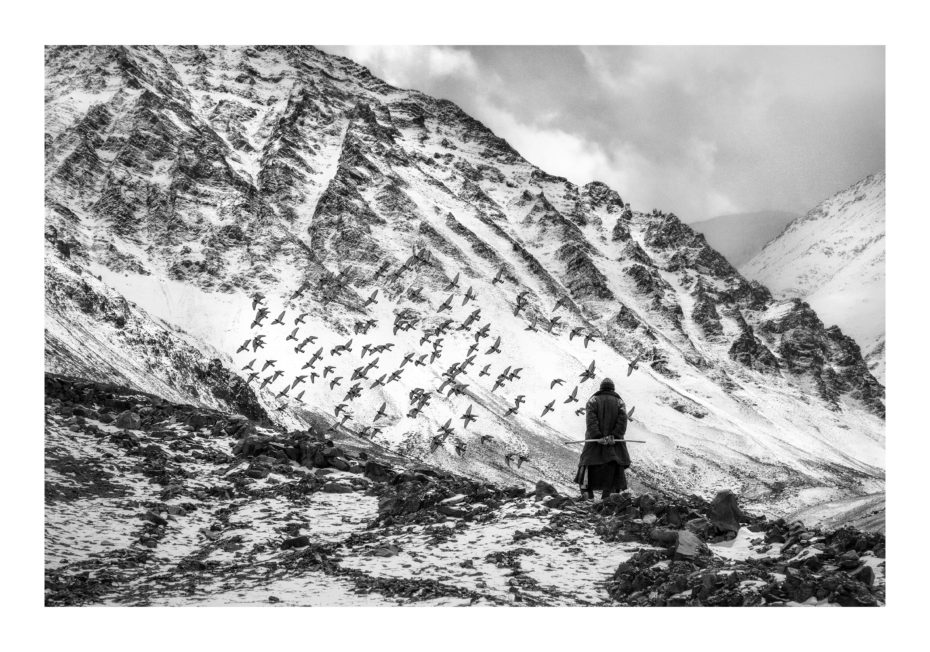 James has spent seventeen years in the field across five continents working as a professional guide and wildlife photographer. He is particularly passionate about big cats and the art of tracking, leading trips to the Pantanal for jaguars, Patagonia for pumas and the Himalayas for snow leopards, where he filmed the first complete sequence of a snow leopard hunting its prey. His photographs have won international awards and have been featured in numerous publications including National Geographic. He is a member of the Okavango Wilderness Project team who recently won the 2019 National Geographic Explorers of the Year for their 2400km canoe expedition to protect the Okavango’s headwaters. Photographic ambassador for the David Shepherd Wildlife Trust and has exhibited at Christie’s in Los Angeles and London.

“The birds have vanished down the sky.
Now the last cloud drains away.
We sit together, the mountains and me,
until only the mountain remains”
-Li Po (701 -762) 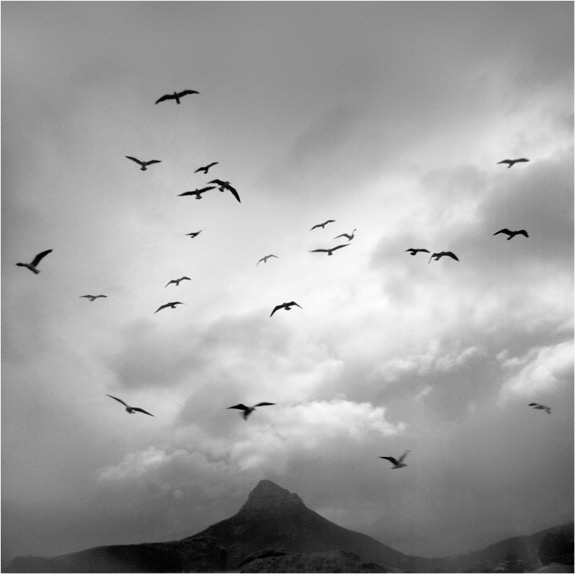 Lambro Tsiliyiannis, or simply Lambro as he is known locally, is one of the most widely travelled and frequently published photographers in South Africa. Those who have worked with Lambro know him not only for his versatility as an artist, but also for his generosity, his spirit of adventure and his embracing openness, qualities that permeate the distinctive images he has created in a career that spans thirty years and almost as many countries.

Hope to see you on Thursday.  For print enquiries please click HERE

Yours in adventure, passion, mystery and travel
Caroline

At The Stillpoint Of The Turning World
I am giving back, please help me to support Elephant conservation

Im so excited to be heading to London, my longtime